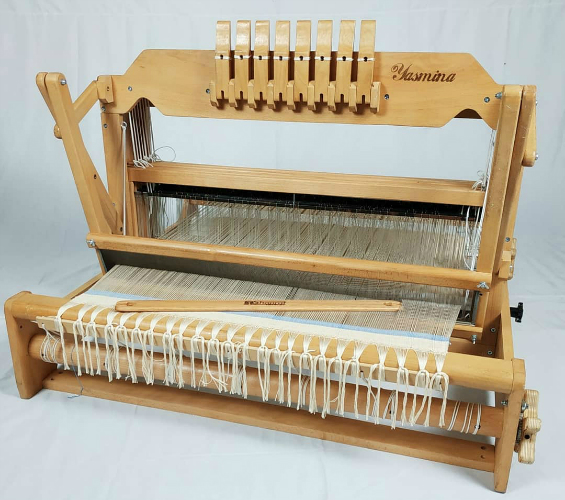 The loom is the tool used by weavers to produce a weaved fabric.The shape, the size and the components of the loom vary according to the width and specifications of the product.

Hand weaving looms can be generally categorized into: simple looms, tapestry and carpet looms, table looms and floor looms. Each category has its own subcategories which will be demonstrated later on, followed by a brief about drawlooms and jacquard loom. The first part of the article will discuss simple looms, tapestry and carpet looms and table looms. The second part is going to discuss floor looms with their subcategories along with drawlooms and hand jacquard loom.

The article will handle the demonstration of looms through several main points: The main composition of the loom, the warp tension on the loom, how to insert and join the weft and the loom’s advantages and disadvantages. In addition, the distinct main item in every loom will be pinpointed

This category comprises 3 main looms: The frame loom, the rigid heddle loom and the inkle loom.

This is the simplest type of hand looms, as it consists of a frame made of wood, metal or plastic. On this frame partially or entirely, a set of pigs are fixed ; they are used for pulling the warp threads on them with the order the weaver defines, which is usually the same area as the desired product.

The weaver usually raises the warp with his own hand or using a wooden bar, a metal bar or a weaving needle for inserting the weft and creating the ornamental design he/ she wants. In addition, the weft’s threads are joined using an external reed or any other similar tool.

The frame loom has many shapes and sizes which depend on the shape and dimensions of the desired product. For example, there are circular, rectangular and triangular frame looms. The images below illustrate some shapes of the frame loom.

– Simplicity, as it can be implemented using very simple tools which can come in handy for whoever needs to make a simple fabric or artistic picture or even get trained on the basic weaving principles.

– It can’t be used for weaving a relatively large fabric.

– It requires defining the product’s size before starting.

– Its production rate is quite low.

The rigid heddle loom is distinguished from the frame loom by the reed which is mainly a wood or plastic board having longitudinal holes with little openings in between. The warp threads are inserted in each hole or opening, so that the reede, if lifted up, could pull up the warp threads in the openings but leave those in the longitudinal holes, likewise, if the reed is lifted down. This helps create the shed, which is the space formed among the warp threads for passing the weft threads through.

The weft threads are inserted in the shed using a ruler shuttle or weaving shuttle as illustrated in the picture. The weft threads are drawn together to form the fabric using the reed itself. This reed is manufactured with different dimensions according the density of the desired fabric. The images below illustrate the shape of a rigid heddle loom along with the reed of different dimensions and shapes.

– A piece of cake to install!

– You can carry it anywhere

– It can weave long fabrics.

– You can easily make fabrics for yourself or your loved ones

– It can be used for creating product samples.

– It’s easier to use than the frame loom.

– The rigid heddle becomes useless when designing and implementing fabrics with complex patterns.

The inkle loom is considered a basic loom; bands can be made using rigid heddle looms but inkle looms are more convenient to use for this purpose. Inkle looms consist of a set of pigs fixed to a wood frame; the warp threads are wrapped around these pigs at the length desired for the band, but you don’t have to pass all the warp threads on all the pigs.

The warp threads are divided into 2 sets; sets are lifted by hand one at a time in order to create the shed. However, a particular number of threads can be lifted in a certain order allocated by the design in mind.

In addition, the inkle loom can be used for card weaving so as to implement more complex patterns of bands. These cards are made from different materials: wood, cardboard or plastic as illustrated in the pictures.

The weft is usually inserted using a ruler shuttle. Several forms and designs of bands can be carried out depending on their usage such as belts and clothes stripes

– It can be carried anywhere.

– It can be used for weaving very long bands after adjusting the number of pigs.

– It has a relatively high production rate.

– Problems may arise in warping in case the desired band is as wide as the pigs.

Tapestry looms are one of the basic looms to install because they usually consist of 2 beams, one for the warp and the other for the cloth, along with a tension tool in order to maintain the warp tension all over the weaving process. Very highly tensioned warp is one of the features of tapestry  looms.

In this kind of weaving, the weft is passed by hand without using a shuttle and it is joined by a manual heddle called the beater as they need to be threaded up strictly. The following images illustrate the tapestry and carpet loom as well as the heddle and the thread.

The table loom is the type of loom which has shafts. The shaft is a wooden or plastic frame that contains a certain number of heddles, either the the thread or metal heddles, in order to pass a certain set of warp threads and control lifting or leaving the shaft. This is intended for forming the pattern that is required to implement on the fabric. The table loom’s name comes from thr fact that it is usually no wider than 75 cm and it’s laid on a table. Even if legs have been attached to it, they would be only for making it steady.

The loom consists of a back warping beam and a front cloth beam along with a tension maintaining system. Sometimes, it contains 2 warping beams for creating fluff in the fabric.

The table loom usually contains 4 shafts or more up to 16 shafts. Each shaft controls a certain number of warp threads and is lifted via a lever system in most table looms; one lever is used for each shaft.The loom in the illustrating image below has 8 shafts, four of which are lifted up so that the required shed can be formed to push the weft thread into it (not depicted in the image).

The weft is inserted by either a ruler shuttle or a weaving shuttle and it is drawn together by means of a reed pushed by hand. Table looms are used for educating and for making production samples or in some tailor studios to produce fabric that is fit for tailoring.

– There are so many designs you can implement with 4 shafts or more; this gives a great designing capacity and potential.

– Easy to connect the shafts with the levers.

– Easy to disassemble and reassemble.

– Easy to add more shafts or remove some of them.

– In wide looms, the load on the levers increases which makes the weaver exert more effort to lift the levers.

– Tension is irregular on all the threads during weaving because only 1 part of the warp is lifted.

There have been discussed simple looms with their subcategories along with rigid heddle looms and table looms. The rest of hand weaving looms are going to be discussed in the second part of the article, in shaa Allah.